On the grand stage of media, current events, and social media, I feel the frustration, anger, discrimination, and marginalization of being an African American and being a woman.

Having police called on African Americans who are living their own lives .

Women of color gone missing and no one is making a big deal about it.

Victims of sexual assault being ostracized for speaking their truth.

The gender pay gap between men and women

If you think that I am just complaining with violins and making excuses, I’m not. I am speaking from my perspective and based on the shoes I walk in every day. If you think I am lying, then you are part of the problem and in denial. Rub your eyes, clean your glasses, and look into the world we live in.

Some days I am so powerless of because the world’s rhetoric and attitude. It does give me anxiety. It makes me feel worthless. The words people say, post, and act on is so unbecoming…especially “Christians.” It’s like I am a walking target wherever I go.  I am not safe in my skin as a woman and as an African American.

God says “I am fearfully and wonderfully made.” (Psalm 139:14)  So even though I may feel worthless or powerless, God reminds me who I am and whose I am.  God made me uniquely as an African American woman “for such a time as this.” (Esther 4:14)

But now thus says the Lord, he who created you, O Jacob, he who formed you, O Israel: “Fear not, for I have redeemed you; I have called you by name, you are mine.-Isaiah 43:11

God called me to be Bianca. Though the world may say all it says, God calls me redeemed, wanted, and valued. That goes to every person on this Earth. You are redeemed in Christ. It does not matter if the world does not like you. God makes you worthy.

For we are his workmanship, created in Christ Jesus for good works, which God prepared beforehand, that we should walk in them.-Ephesians 2:10

God did not create me to be nothing. God created me for His purpose. I am skilled with gifts and talents for good. Though man may disqualify me, God established me, Bianca, to work, to provide input to humanity, to serve others, and to have a voice. All the things God creates in me, He uniquely made you for the same reason and purpose. You are somebody.

But you are a chosen race, a royal priesthood, a holy nation, a people for his own possession, that you may proclaim the excellencies of him who called you out of darkness into his marvelous light.-1 Peter 2:9

God never said white people are God’s chosen people. God does not say anything about a race being superior to anyone. No race has dominion over an entire people…that’s God arena. When I accepted Christ into my heart, I became His. God said, “You are chosen. You are mine.” With that, there is an eternal victory I have. Jesus paid that price to cover my faults and failures. Thus, I have a place in heaven with Him.

So I empowered by my physical features and gender because God made me uniquely. I am the Princess of a King. I have a voice. God did not create me to be silent but to work and hustle for His glory. I am not perfect but I am redeemed by the Savior of the Universe. 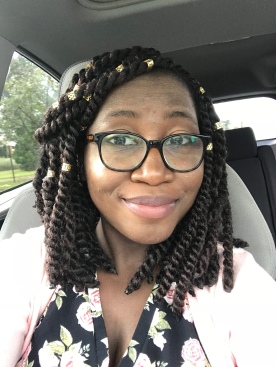 No man can cut down who God promotes.

There is no door God opens that man can shut.

So I use my God-created self to be awesome. Yes, I still get weird looks for being an outspoken woman or for being black, or being too ethnic. But it’s whatever. If God likes it, then imma be Bianca. I am empowered black girl magic.